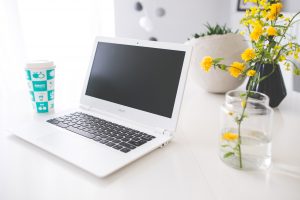 Did you buy a laptop for yourself or someone in your family in the last year? Was it a Chromebook? If not, you might have made a mistake. Chromebooks are still perceived by many as just a web browser running on low powered hardware but they have evolved to be so much more than that. Many Chromebooks can run android apps now, and more and more services are available via the web browser. Read on for nine reasons you should have bought a Chromebook. But don’t fret if you didn’t buy a Chromebook. You might have made the right decision. As a bonus, I’ll give you two reasons you shouldn’t have bought a Chromebook.

What is a Chromebook?

Before I get started, let me make sure and explain what a Chromebook is. Chromebooks run ChromeOS, and operating system based on the Chrome web browser. Most other laptops run either Windows or macOS. Chromebooks are designed to primarily be used while connected to the Internet because most ChromeOS applications are in the cloud. You can use Chromebooks offline, but often some functionality won’t be there, or there will be a need to sync when you next connect to the Internet. ChromeOS, being an operating system developed by Google, heavily favors Google applications like Google Drive/Docs, Gmail, Calendar, etc. Pretty much any service that can run in a chrome browser will work.

Some models of Chromebooks can access the Google Play Market allowing you to run Android apps. Some popular models with this functionality include the Samsung Chromebook Pro and Plus models (check out my review of these models), the Asus Chromebook Flip, the Dell Chromebook 3189, and Google’s Pixelbook. Not every Chromebook has this feature, so you should look carefully at the specs if this is important to you. Although most Android apps will probably run just fine if there is a particular app you are counting on you may want to make sure that app runs on the Chromebook you are thinking of purchasing. For up to date options and recommendations, take a look at my article on the best Chromebooks you can buy now or the Chromebook section in my Buyer’s Guide.

Chromebooks have done well in the education market. Many schools have adopted them as a budget and security conscious alternative to Windows laptops and iPads. My son’s school recently switched over from iPads to Chromebooks because they found them less expensive and easier to support.

Reason #1: It costs less than the laptop you bought.

Most Chromebooks cost less than $400. A good, fully functional Chromebook can be had found for $300 or less. Did you pay more than that for your last laptop? Chances are you did. Chromebook’s do cover a wide range of prices but many of them are extremely affordable. The Samsung Chromebook Pro, one of the high-end Chromebooks, can be found in the low $500 range. It’s slightly less powerful little brother can be found in the low $400s. Decent Windows 10 laptops usually start around $500, and they usually have a few compromises (slow, few expansions ports, lower quality materials). Chromebooks don’t require high specs (fast CPU, RAM, or much hard drive space) because a lot their storage and applications run in the cloud, and the software that runs on the laptop doesn’t need much power.

Reason #2: It weighs less than the laptop you just bought.

Chromebooks tend to have smaller screens than many Windows and Apple laptops but the positive to this is that they also weight a lot less. All Chromebooks are lightweight and ultra-portable often weighing in at under 3lbs. The 13” MacBook Air is 2.96lbs, but you can buy 3-4 Chromebooks for the price of one of those. The Surface Pro 4 is also super lightweight, but it will set you back more money than the MacBook Air. If you aren’t willing to pay a premium price you Windows or MacOS laptop will be bulkier and weight much more than an equivalent sized Chromebook.

Reason #3: The battery last longer than your laptop battery.

Many people buy Windows laptops because they want to run Word, Excel, and PowerPoint. In this day and age do you really need these applications? Google Docs, Sheets and Slides can create documents that do most of what you want them to do and they can run on any computer with a modern web browser. You can even save your files from Google in MS Office formats. I’m sure some of you have occasions where you have to use MS Office. You still have a couple of options with a Chromebook. You can buy an Office 365 subscription with the money you saved from not buying a Windows or Mac laptop and access Office Online. If you purchased a Chromebook that also runs Android apps you can you simply download the office Android apps for free!

Reason #5: The laptop you bought isn’t as secure as a Chromebook.

ChromeOS is more secure than Windows by design. They are much stricter on the type of software that can be installed, and their default security settings are designed to keep you safe. Also, as a less popular OS, they aren’t as enticing for hackers to exploit. The reduced popularity combined with the increased security means fewer exploitable bugs than Windows and MacOS. No OS is completely secure, but by limiting functionality and being designed for security ChromeOS leads the laptop pack.

Reason #6: You bought a laptop for your child.

By the time a child reaches middle school often they are in need of some type of portable computing device, either a tablet or a laptop. Children may be more technically savvy, but they still have a lot to learn when it comes to safety, security, and plain old taking care of a portable device. I already mentioned a Chromebook’s security. But they also make many “rugged” versions of Chromebooks targeted directly for children and much more affordable prices than their windows counterparts. Also, the technology needs of a child are much more simplified – they aren’t likely to need the full power of an MS Office Suite or Windows-only software. More and more software is available via apps and the web, and a Chromebook can get a child access to both. In fact, a Chromebook is a great back to school gift.

Reason #7: You use a laptop and a large tablet.

As I mentioned earlier, Chromebooks can double as Android tablets. Popular touchscreen models come with the Google Play market installed and run most Android apps, including games. You can easily turn your laptop into a large and fully functional Android tablet. If you are looking for a small tablet or an iOS tablet this won’t be ideal. But with phone sizes approaching small tablet sizes this could easily be the large tablet for you.

Reason #8: You spend most of your laptop time in a browser.

Gone are the days when most people buy and download tons of desktop apps to use on their computers. These days, more and more of the software we use comes from mobile apps and services provided via the web browser. Almost everything has a web frontend or an app now, and you pay online for premium services. This has been great for consumers because it allows us to access important resources from almost anywhere without having to have something downloaded and configured on your computer. The Chromebook is built for this world, as the OS presents itself as a web browser. One of the knocks on Chromebooks is that they don’t come with much storage space. You don’t need much storage space if most of what you are accessing is in the cloud. In this way, the Chromebook is optimized for the modern computing experience.

Reason #9: You have another workhorse computer at home.

One of the big downsides to most Chromebooks is that they are relatively low powered compared to many Windows and Mac laptops. If you need to do something that requires a lot of computing resources you can’t use a Chromebook. If you are a user that needs something more powerful (e.g. for games), you probably already have a powerful computer somewhere else in your home. This will allow your Chromebook to be the portable, long-lasting, versatile, secure laptop that it is meant to be.

While there are a lot of compelling reasons to buy a Chromebook, here are two reasons you might want to stay away from them:

Two Reasons not to buy a Chromebook:

Reason #1: You use a lot of Microsoft or Apple software.

If you are deep in the Apple ecosystem, or you are a power user and rely heavily on various Microsoft software, you are going to be better off with a MacBook or Windows laptop. Chromebooks are more meant for the general users and you can get away with basic functionality for most things, but you can’t add a lot of desktop-based software, and they don’t integrate seamlessly into other ecosystems.

Let’s state this very clearly. If you aren’t going to be in places with a stable wifi connection to the Internet then your Chromebook will be a waste of money. This is somewhat true for most portable devices without a cellular connection, but for a machine built to access services from and store files in the cloud, this is extremely true. Your Chromebook more resembles a flat paperweight than an affordable laptop without access to the cloud, and you probably should have bought something else!

Do you have a Chromebook? Are there more reasons to buy or avoid one? Let me know what you think in the comments below!

Why Home Assistant is the Perfect Smart Home Hub for Me
7 Things You Need To Know When You Cut The Cord
My First Docker Container
Share this:

This website uses cookies to improve your experience while you navigate through the website. Out of these, the cookies that are categorized as necessary are stored on your browser as they are essential for the working of basic functionalities of the website. We also use third-party cookies that help us analyze and understand how you use this website. These cookies will be stored in your browser only with your consent. You also have the option to opt-out of these cookies. But opting out of some of these cookies may affect your browsing experience.
Necessary Always Enabled
Necessary cookies are absolutely essential for the website to function properly. This category only includes cookies that ensures basic functionalities and security features of the website. These cookies do not store any personal information.
Non-necessary
Any cookies that may not be particularly necessary for the website to function and is used specifically to collect user personal data via analytics, ads, other embedded contents are termed as non-necessary cookies. It is mandatory to procure user consent prior to running these cookies on your website.
SAVE & ACCEPT
Thoughtworthy

9 Reasons You Should Have Bought a Chromebook