Do you have a backup for your router? What would happen to your home network if your router stopped working? A virtual router might be useful to you.

My router died! Now what?

Unfortunately, my router recently failed on me. I had a custom built pfSense router that ran strong for a couple of years and then one day it turned off and wouldn’t turn back on. I think the power supply died. My whole smart home infrastructure seemed dead. Smart speakers didn’t work because they couldn’t reach Google and Amazon’s servers. Neither my local or remote backups worked because my computers couldn’t talk to each other or the Internet. Similarly, no video surveillance, no streaming videos from my home media network or to my streaming sticks. My home security system monitoring luckily has a cellular backup, or even that would have been compromised. Everything I built no longer worked!

I didn’t want to just go out and buy another router off the shelf because I love using pfSense. Also, I didn’t want to just buy another computer and build another router (if you do, here are some good hardware options). I want to troubleshoot what is wrong with my current hardware before spending the money to buy all new hardware. Only a part or two might actually need replacing.

However, I still needed a temporary solution or nothing in the house would work! That’s when I decided to virtualize my router. I figured there was no faster solution to get our network up and running again, even if just temporarily.

Luckily for me, I already had everything I needed to virtualize a router:

Building pfSense inside of VirtualBox is pretty straightforward. The steps are basically:

At this point, pfSense should go through and install everything. Configuring your router after installation depends on your network needs. Like most routers, pfSense provides a web interface. In my case, I already had a pfSense configuration file with all my settings so I just needed to restore that to get my network back!

There are a lot of tutorials on installing and configuring pfSense, even ones specific to VirtualBox. Here are a few to get you started:

When you are all done with installation and configuration, below is the console view of what you end up with. Of course, the web interface is much nicer and easier to configure for most! 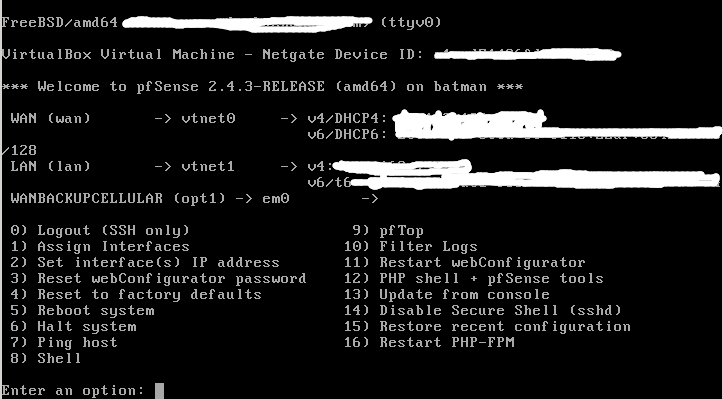 Initially, the performance was a little slow. I was only getting about 25% of my usual download bandwidth. Then I discovered one of my NICs had a compatibility problem with pfSense, so I switched which NIC I was using, and then I was back to my pre-virtualization speeds. If you are buying hardware for pfSense, be sure to check on NIC compatibility, or just stick with Intel NICs. I only provided one core from my 7-year-old machine, and the web GUI was snappy and the machine was under less load than my hardware equivalent (powered by an Intel Atom).

I have found a lot of advantages to running a virtual router:

I’ve been running with a stable virtual router for a few months now, and I haven’t had time to investigate what happened to my old router. I think going forward I will always at least keep a virtual router as a backup. It’s working so well, that I may just keep my primary router virtualized, and perhaps have separate hosts that can run the pfSense VM.

EDIT: After a couple of years, I have moved back to a hardware modem.

How many of you have virtual routers? Are you considering one? Let us know!

If you are interested in using pfSense, here is some additional guidance on planning an install and post-install configuration. Also, if you run pfSense, here are some tips to get the most out of it. It can be an important part of securing your home network.

How and Why I Built a Virtual Router 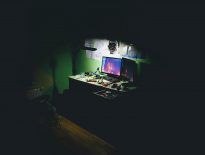