I’ve been playing with Docker and now I have a few containers, like Emby and Plex. Although I’m comfortable with the command line, it is nice to have a GUI to manage the containers. In looking for a simple and web-based manager, I stumbled upon Portainer.io.

Portainer is an open-source web-based management user interface for Docker. It allows you to manage images, networks, and volumes in addition to containers. One really cool thing about Portainer is that it is a Docker container itself!

How Do You Install Portainer?

You can then access the UI at http://yourip:9000/ and see a screen similar to:

What Can You Do With Portainer?

I won’t pretend to be an expert, but there are few features that caught me eye as a novice to Docker:

One really useful feature the ability to recreate a container. Images for containers are updated all the time. In order to update your container with a new image you usually have to:

This isn’t too complicated, but it can get tedious for frequently updated containers. Portainer allows you to do this all in one click with the Recreate functionality. See the recreate button in image below:

I’ve just scratched the surface of what can be done with Portainer. I can tell you that the recreate feature alone is worth it, but it also nice to have a centralized web-based management and monitoring tool for all of my Docker containers, images, volumes, and network settings. If you are looking for a similar tool I highly recommend you check it out. It’s easy enough to try!

by HomeTechHacker time to read: 2 min 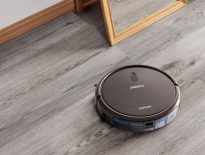