After getting experience with Z-wave devices and my first smarthome hub, I was ready for more. Over time newer Wifi standards emerged (primarily 802.11AC, or what is now known as WiFi -5). Unfortunately, my alarm system failed, as did my router hardware. Streaming video kept growing and growing, and cord-cutting became desireable. All of this led me to develop my smarthome to state it is in now.

For a while, my smarthome WiFi was primarily powered by Linksys WRTG54 routers flashed with DD-WRT and configured to work as access points. After a while, these devices became long in the tooth. I had dead spots in my house, every so often the devices required reboots, and faster WiFi standards emerged.

I decided it was time to get proper access points that could:

In addition, these access points allowed me to simplify my network administration as well as implement a proper Internet of things security plan. Using the free TP-Link controller software I am able to restrict access of certain devices that I don’t fully trust and that don’t need access to my LAN. I am also able to block clients and set up guest wifi. No longer do I have to manually configure multiple devices. I can do all of my management through the controller.

Going virtual with my router

I eventually migrated away from DD-WRT running on a Netgear WNDR3400 router. DD-WRT was a great improvement over stock router firmware. However, my network was growing and I wanted more power and control over my network and its security.

My research led me to pfSense. It had all the security features I needed and actually allowed me to retire Security Onion because pfSense comes with multiple IDS/IPS options. It was easy to implement OpenVPN for secure access to my home network away from home. And, last but not least, I could pick my own upgradeable hardware.

pfSense worked great for quite a few years for me. Unfortunately, one day the power supply in my hardware just died, and I didn’t have any spare hardware. At that point, I thought I’d try temporarily running pfSense in a virtual machine until I was able to get new hardware.

Well, I still haven’t bought that hardware. Running pfSense in a VM has been great. I have less fear of breaking anything because I can simply roll back to a snapshot. I also have 2 hosts capable of running the VM, so I can easily move pfSense to another host if I need to. I’m not sure if I’m going back to a hardware router.

A while back I decided that Internet access at my house was important enough that I wanted some fault tolerance and a lot of speed. I switched over from cable to gigabit fiber Internet access. I also implemented relatively inexpensive cellular Internet failover in case fiber goes down. It was pretty easy to implement with pfSense.

I centralize my logs using Graylog to improve my home network security. I also have automated backups both locally and to the cloud.

My home network has grown from a handful of IPS to:

Physical home security continues to be important for me to feel good about my family’s safety. My old Visonic system worked great for a while, but eventually, it failed and I was once again on the market looking for a new security system.

I wanted something I could control remotely and integrate with my smarthome. Eventually, I settled on an Alarm.com compatible Z-wave DIY alarm system, the 2GIG GC2E Z-wave unit. Setup was pretty easy. The best feature of the alarm for a smarthome is that it can serve as a secondary Z-wave controller. This allows it to control lights and other Z-wave devices in my house. For instance, when the alarm detects a violation, it can turn on lights in the house or turn on a secondary Z-wave siren or strobe light.

In addition to the security system, I have completely built out my Zoneminder surveillance system. I now have cameras that cover almost the entire perimeter of my house recording 24/7 locally. I’ve even helped the police catch package thieves with my recordings.

Panic buttons are the most recent security feature I added to my home. I have placed inexpensive buttons in strategic places in the house. When they are pressed, they turn on security light outside my house (visible from the street) red, and they send a text to my wife and I with the location (room) of the button that was pressed. My children are home alone a lot in the summer, and they know to press these buttons in an emergency.

The greatest source of growth of IP addresses and devices in my homes is due to the Internet of Things. Here’s a list of the devices I’ve added in the last couple of years:

Last, but not least, I’ve joined the smart voice assistant revolution. Although I prefer the Google ecosystem to the Alexa ecosystem, I have both. I have a Google Home, some original google minis, and even the great but now discontinued Insignia Smart Speaker. I have a couple of Echo Dots, and the Brilliant Home Controls have Alexa built-in.

Perhaps the biggest leap my smarthome has taken in recent years was migrating to Home Assistant as my smarthome hub. It is the glue that ties my entire smarthome together, both for local devices and cloud access.

My vera had become long in the tooth and somewhat unstable over the years. I was in search of another smarthome controller and after looking at a few options, I settled on Home Assistant. It integrates my:

Pretty much everything. It even integrated with my Veralite so I didn’t have to wholesale move everything over at once. Eventually, I moved all my Z-wave devices over to Home Assistant and retired my Vera.

Home Assistant has been a revelation. I have written over 50 automations that do everything from saying high to me when I get home from work to make sure my two distinct HVAC systems work in harmony. Other key automations include:

Home Assistant also ties in my smart TVs, A/V receivers, smart speakers and so much more in ways that allow me to make our house very convenient and user-friendly. I can’t imagine my house without it.

My smarthome evolution began with my desire to turn my house into a multimedia streaming dynamo. Much of that infrastructure would eventually be built on MythTV. In 2019 I joined a growing group of people in cutting the cord, leading me to say goodbye the MythTV.

I transitioned from DirecTV to YouTubeTV, and retired my MythTV frontends and replaced them with Roku boxes and TVs. My family has enjoyed the freedom of cordcutting, and I’ve enjoyed the simpler infrastructure and reduced costs.

In order to fully leave MythTV, I needed to embrace a new way of getting my local video content. I first tried Plex, but eventually settled on Emby. These apps also introduced me to the world of Docker, which has further made installing and maintaining apps easier.

I have come a long way in my smarthome evolution journey. From not knowing what a smarthome is, not even having a router to where I am now has been a fun and challenging journey. What does the future hold? That will be the topic of the final installment of this series.

Note: I’ve updated the state of my smart home for 2021 in this article. 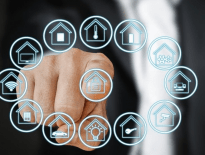 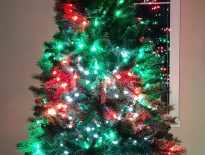 Home Assistant 10 Minute LED Lights For Any Holiday With WLED